Photos of the railway operations from the Hydro Electric Power Commission and the Queenston-Chippawa Project. 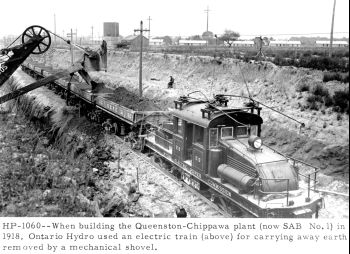 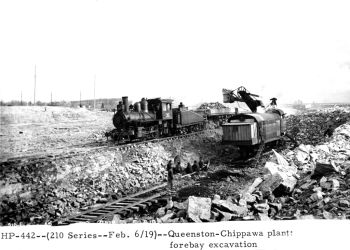 Hydro Electric Power Commission BLW electric locomotive #E9 is shown with a string of side dump cars, being loaded by a Bucyrus stripping shovel. This photo was taken during the construction of the Queenston-Chippawa Project (Sir Adam Beck G.S. #1) 1918 - Niagara Falls (Ont.) Library Hydro Electric Power Commission 0-4-0 #35 with some side dump cars is shown being loaded with rock during the excavation of the forebay for Adam Beck G.S. #1. Note the steam shovel is on rail, but the track behind it is cut.1919 - Niagara Falls (Ont.) Library 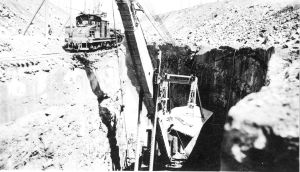 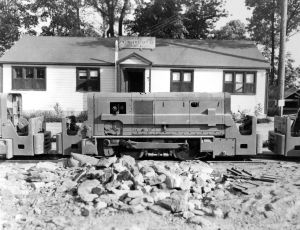 A Bucyrus stripping shovel is shown here loading dump cars during construction of the Hydro Canal. H.E.P.C. electric #E2 is shown moving the cars into position.C-1919 - Niagara Falls (Ont) LibraryConstruction of Ontario Hydro tunnels for the Sir Adam Beck - Niagara Generating Station #2. The Engineer's Office for Shaft number 1 and 10 ton mining locomotives, along with cars, flat cars, powder cars, conveyor loader, all of which were never used as mucky condition of the floor of the tunnel would not permit.1953 - Niagara Falls (Ont) Library