The Niagara Railway Museum went on the road again this weekend, taking part in the Buffalo Train and Toy Show held at the Hamburg Fairgrounds in Hamburg NY.? This bi-annual show draws from all over, and we are very pleased to be a part of it. We took the CP Woodings CBI motorcar and our small display. As a bonus, we were placed beside a restored Kalamazoo Velocipede, so it showed 2 different eras of track equipment. We spoke to many people about the Museum, and what we have planned for our 20th anniversary this year.? A lot of show and open house flyers were handed out, as were Museum brochures and business cards. Hoping for another great day on Sunday.

The motorcar is always well received as part of our small display.

Ken & Adam discuss the day before the show opens.

Our 1985 Woodings CBI beside an 1883 Kalamzoo Velocipede.

Flower City Hi Railers have a rather impressive O layout. This is a dream scheme GT unit.

I know this is a bit late, but work and life sometimes gets in the way.? Anyways, it?s been a very busy couple of weeks.? We had a very successful open house on September 7? & 8, 2013. With all the recent press from Niagara This Week and Cogeco, attendance was excellent. New and repeat visitors were impressed with our facility and the progress we?ve made. The Fort Erie LaFrance Firefighting Museum paid us a very short visit on Saturday. Unfortunately just after they arrived with their 1947 LaFrance Imperial Pumper truck, it started to rain.? Because their equipment is restored to perfect condition, they had to get the truck back to their Museum and out of the weather. However we look forward to working with them and having them at our site next year. We also gained some great donations, including 60+ photos of CN at Niagara Falls, including the visit of the famous Flying Scotsman. Steve Konig donated an HO model of Bridge 17 at Dain City built by the late Wilf Pierson . This model joins the G scale Flanger and Spreader also built by Wilf. The Ontario Northland Historical Society also joined us for the open house with their HO layout and artifact display. Despite the rain on Saturday afternoon, it was still a great turnout, and Sunday was even better.? A big thanks to everyone who came out to support the Museum and Railway history in Niagara. 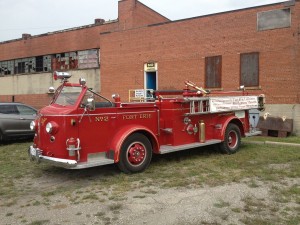 The Fort Erie LaFrance Firefighting Museum?s 1947 LaFrance Imperial Pumper on display before the rain came in. 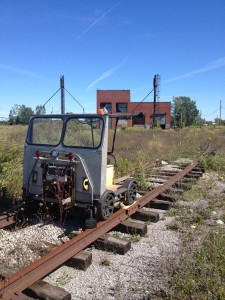 The Fairmont M19 on it?s first trip to the new end of track, which was extended by 50ft in August. 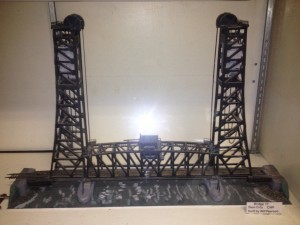 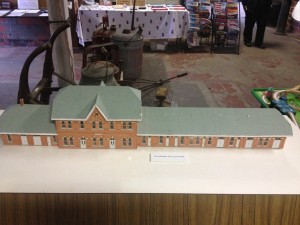 Other work that has been progressing has been the windows, and the Whiting 2TMA Trackmobile.? The transmission is in the pit and ready to be placed into the Trackmobile in the next 2 weeks. We hope to have the machine back in service in the next month. We also picked up a switch stand and a used Racine rail drill, which will be very useful in our continued track construction.? We have also been offered about 30 sticks of 80/85 & 100lb rail, which we are currently looking into moving to the Museum site. 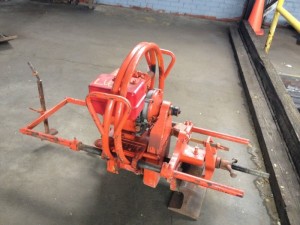 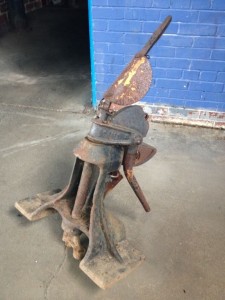 Lots of things happening at the Museum.? We thank everyone for a great 2013, and look forward to seeing you at the Niagara Model Railway Show on October 27th, 2013 at the CAW Hall in St. Catharines. Our next full open house will be in May 2014. However, visitors are always welcome if someone is at the shop on Saturday.? If you?d like to visit the Museum, please contact us to arrange for a tour.

The Niagara Railway Museum Inc. attended the 51st annual Steam Era power show in Milton on the Labour Day long weekend.? This is one of the largest events of it’s kind in Canada, and this years show featured numerous makes and models of farm tractors, construction equipment, and steam traction engines.? There were 10 traction engines under steam, and 2 smaller steam engines powering other equipment.? There were also vendors, some great food, a large Meccano display, and lots of items for sale in the flea market.? There was a large kids area, and quite a few antique cars & trucks to top things off.? There were garden tractor pulls Friday night, farm tractor pulls Saturday morning, and a country music show Saturday night.? Kevin Forster of Toronto also hooked his 20hp George White Traction engine up to the fan and put on a bit of a spark show on the Saturday night (he had also hooked it up to the tractor pull sled earlier in the day!)? Kevin also invited me up onto his machine to take it for a spin around the grounds, over an hour later, and after?joining the parade past the grandstand, we finally parked it.? Also had the opportunity to drive the big Sawyer Massey 75hp Steam traction engine with a friend, THRA member, and railroader, Michael Guy.? This was a great 2hr endeavour that also had us in the competition with the other traction engines.? This was an excellent weekend, and I must say that being able to drive the steam engines around the grouds were by far the highlight of the weekend.

My thanks to the NRM members that came out to help man the booth during the show, and to set up and tear down.? We’ve already been invited back next year, and we are looking forward to it.? Now we can turn our attention to our own event on September 10/11, 2011 at the NRM site in Fort Erie.