With just a 3 man crew today, we still managed to get quite a bit done. The main goal of the day was to get the 4 ex-CN Fairmont A4d Gangcars unloaded from the 3rd boxcar, where they?ve been stored for more than 10yrs. The boxcar had to be moved into position for unloading, so the GE was fired up for the job.? Having a working locomotive is an incredible asset to the Museum.

The GE smokes under the exhaust hood, charging its air, ready to move the boxcar forward.

Unloading the first car from the boxcar.

The cars can’t just be taken out the door due to their size, so they have to be moved into a position to come out the door on an angle, which can still be a bit tight. Of the 4 cars, one of them will be cosmetically restored and be sent to the Northern Ontario Railway Museum in Capreol for display, one will remain with us and be returned to operation, while the other 2 are more or less parts cars.? One may be converted to a rider car of sorts to allow short rides on the Museum track.

CN 187-49 sits outside for the first time in over 10yrs. This car will be restored by the Museum.

The work took about 3hrs to complete, and all 4 cars saw daylight before being put back into the shop. CN 186-70 will be the car for Capreol. The NRM has had these cars for about 13yrs, so it’s good to finally have them out of the boxcar.

All 4 cars are together inside the shop awaiting movement to secure storage and eventual restoration.

Before and after the cars were unloaded, Wayne was working on stripping paint off the walkway railing. The shop was fairly mild, above zero, and he also got a coat of primer on the railing. Wayne has done a lot of painting around the shop, and it’s really helped to bring the place back to life.? The new refurbished?headlight (a locomotive ditch light) was test fit to the front of the Hobby Shop trolley, and looks pretty good.? It should work out quite well for display.

The empty boxcar, ready for cleaning and conversion to a display/store car

Wayne cleaning the railing for painting

The trolley has a new light. (used the flashlight on a cell phone to light it up for the pic)

The Niagara Railway Museum would like to extend its thanks to Ted Lucas and his staff at Lucas Lift Truck in Thorold South.? Ted has helped us many times, and even provided the forklift when we loaded these cars into the boxcar over 10yrs ago. The job couldn’t have been done without this forklift, and we appreciate all the help Ted has given us over the years.

With one month down now in 2016, progress continues at the shop.? Some new displays are being worked on, and there will be even more to see this year.

Work progresses through the winter

Despite warmer than usual weather, work has been progressing at a steady pace.? One project currently being worked on is the cleaning and setting up of the display car inside one of the ex-CP Rail boxcars. The car is close to completion, and will make its debut at the first open house in May 2015. This car will be a permanent display car, and will hopefully allow us to open on a more regular basis throughout the year. With all the great work this year, and all of the Museum equipment now on site, it will allow us to refocus our efforts next year on new things. This includes continued equipment restoration, and the eventual acquisition of the current leased property. 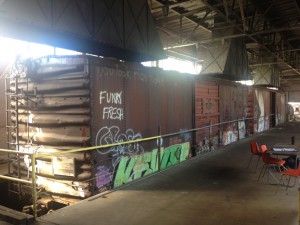 The display and storage cars are inside the shop, awaiting work on the doors and interiors.

October 11th was the annual Thanksgiving track work weekend at the shop.? The goal was to continue working through the turnout to connect the south and middle track. Ken, John, Wayne G and Aaron managed to get half of the turnout laid out and partially spiked.? One more full day and the turnout should be usable. Half of the middle track has also been gauged, as has the straight side of the turnout. Elsewhere Ken and Wayne M were cleaning up some brush? previously cut down.

As a reminder, the Annual Niagara Model Railway Show will be held at its new location on October 26th, from 10am to 3:30pm at the Merriton Community Centre, 7 Park St. in St. Catharines.? Information on the show including the show flyer and vendor form are available on the website at www.nfrm.ca/nfmrs.php 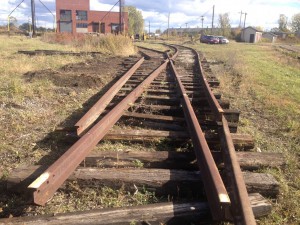 Work progressed into the #8 turnout, with half of the rail being installed, and ready for spiking. 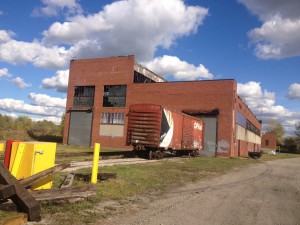 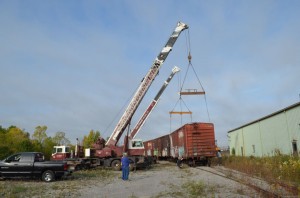 After almost a year in Stevensville, and even longer in storage in Niagara Falls, the Museums 3 ex-CP Rail boxcars have finally arrived at the shop. The move took place on Monday September 29th and took just over 12hrs to complete. 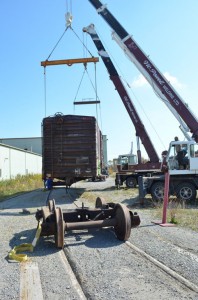 With very good summer weather (which we didn?t get this summer!), Ken, John, Rick and Gary from the Museum met with the mover, Pioneer Heavy Haul,and the cranes from Vic Powell Welding of Dunnville, at the former DMI Industries plant (now owned by Trinity Industries of Texas) in Stevensville, ON.? Ken Sr. and Wayne G were at the shop getting things ready for the arrival on that end. #401639 was the first car loaded, with #401258 second and #57974 last. The load was sitting high on the trailers as the air tanks on the bottom of the cars could not be removed. Blocking was utilized to keep the cars off the trailer deck. The first car took the longest for loading, having to have smaller blocks placed to lower it further to clear the wires. The lifts went well, however movement to the site was slow. 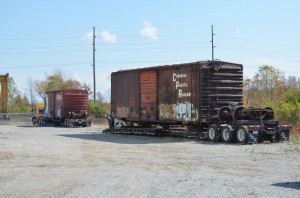 It was a lengthy process getting the cars loaded and tied down. Attar Metals, our fantastic neighbours to the west of our location (Who operate out of the former CN Car shops), brought a flat deck over to move the wheelsets from DMI to the shop.? They also came over to the shop with the loader to pull the Plymouth and steam engine outside as 2 of the boxcars were going inside behind HEPC #46. Once it was all done, they also moved the locomotives back inside the shop. 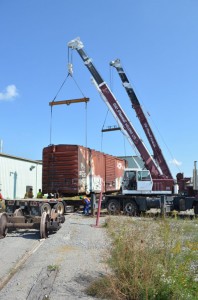 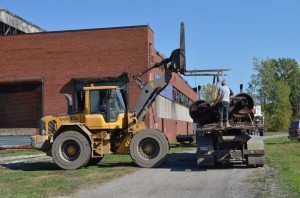 Milton from Attar Metals unloads the wheelsets while waiting for the first car to arrive.

CP 401258 arrived at the shop around 4pm and was quickly unloaded onto its wheels and moved easily inside the shop.? The Trackmobile was used for this, but it wasn?t really needed, as it rolled so well we actually just pushed it the final 20ft to the stop blocks. The final 2 cars arrived at dusk and were unloaded and placed onto their trucks in the dark. 401639 shares the track behind HEPC #46 with 401258, while 57974 is currently outside awaiting movement into the middle track behind HEPC E-7. 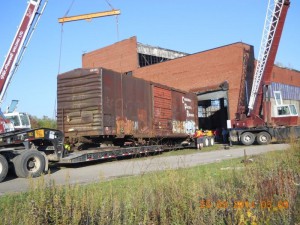 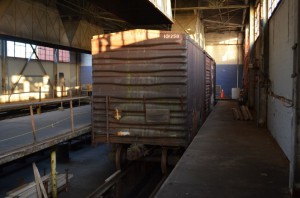 The Niagara Railway Museum extends its thanks to:

– Pioneer Heavy Haul and Vic Powell Welding for the floats and cranes for this move.

– Milton Braun and Attar Metals Fort Erie for their continued support and assistance. So much couldn’t be accomplished without their help.

– Preston Bass and Trinity Industries of Dallas, Texas, owners of the former DMI plant for allowing us to move the cars to their site, and for their patience as we worked through the lengthy process of making this move happen. 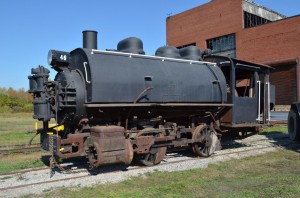 HEPC #46 spends some time outside for the first time since she arrived 4yrs ago. 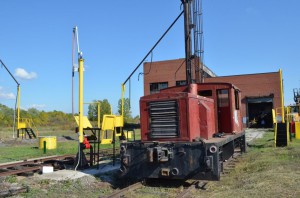 The Plymouth was also outside, and made it further down the track than ever before in order to allow space for the unloading of the boxcars.

The NRM’s ex-CP Rail crane is stored inside the display car, awaiting it’s return to daylight and restoration.

Saturday December 7, saw a crew of 3 head to the temporary storage location of the NRM’s 3 boxcars. The main goal of the day was to inspect the contents of each car, and ensure everything made the rail journey safely, and to make sure everything is stable and braced for the eventual road move to the Museum site. Everything looked pretty good. Our storage rack shifted a bit and the signal case fell over, but other than that, the items were in really good shape. It was a bit of a struggle to open doors that haven’t been opened in a few years, and it was great to once again see exactly what we even have in the cars. 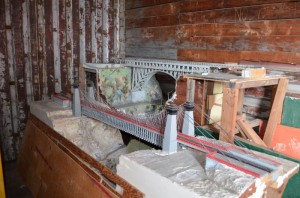 2 of the 3 bridges built by the late Frank Sloan are seen inside the storage car. This is the Suspension Bridge and Whirlpool Bridge. The Museum also has the Cantilever Bridge.

The Museum is open this Saturday from 10am to 1pm. Feel free to stop by if you’re?in the area.

The Niagara Railway Museum Inc. is very pleased to report that our 3 CP Rail boxcars are one step closer to the Museum site in Fort Erie after a successful move out of Niagara Falls today to a temporary storage location in Stevensville.? The cars were secured at 1630 Tuesday night after a very long day for the CP Rail crew that moved them, and our members who were there to make sure everything went well. 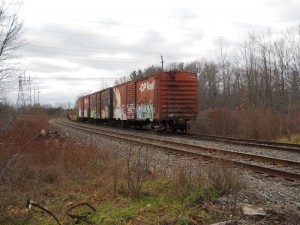 The cars are moved for the first time in years on the end of the intermodal cars. 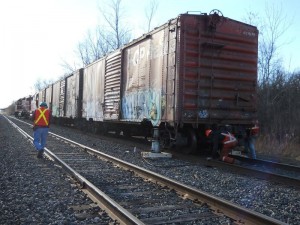 There was a small glitch with the movement, but the Mechanical department anticipated this issue and resolved it in very little time. The boxcars were marshalled on the head end to cut down on the time spent at Brookfield, this allowed the crew to cut off the well cars, and shove down the Fort Erie branch.? The train was led by a hi rail as the line has not seen a train in a few months.

Thanks to the great train crew and mechanical department, the cars arrived safe and sound, and ended a long awaited step for the Niagara Railway Museum Inc.? We are now working to move the cars the final distance to the Museum site by road, which we are hoping will be done by the end of the year. 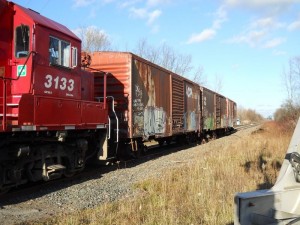 The pair of GP38-2?s did the work to move all the cars, seen here pulling across Dorchester Rd. 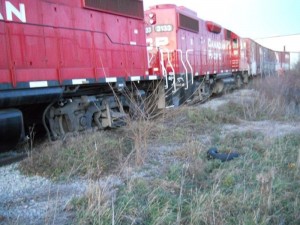 The NRM expresses its gratitude to those at Canadian Pacific that made this whole move possible.? The train crew did a great job ensuring our cars arrived safely, and the cars were spared any damage under the watchful eye of the mechanical department who anticipated a problem before it was allowed to escalate. We also thank Trinity Industries for allowing us to use the property for temporary storage and loading of the cars for movement to our site. 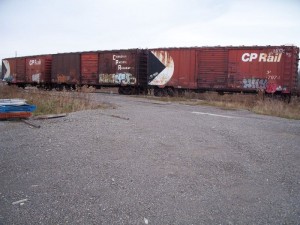 The cars are safe and sound at the temporary storage location in Stevensville.

We still have a long road ahead, but will continue to move forward and get all of our equipment on one site.? Information on the final move will be posted here when we have the info available.

We are accepting donations to help offset the cost of the road movement for the cars.? Any donations will receive a charitable tax receipt, along with a plaque on our donor wall inside the display boxcar.? Please contact the Museum if you?d like to contribute.