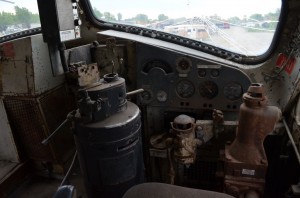 There has been a great deal of work going on since the last update, and there is so much more to come. In the first part we take a look at the inside of the cab.? For the most part it?s in pretty got condition, needs a good scraping and a repaint, but other than that, not bad.? It is missing some parts, which the Museum will seek to replace as time and funds permit.? Missing are the Barco speedometer, horn handle, and control head for the fuel pump, control stand and lights. The seats are intact and in pretty good condition, as is the rest of the control stand. 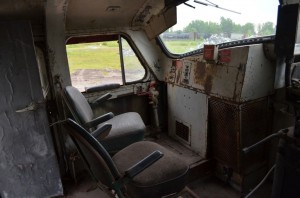 Across the cab on the Conductor’s side complete with emergency brake valve.

The cab is missing 4 cover panels inside, 2 from the lower part of each door, and 2 side panels from beside the Conductor and Engineers seats. There is also one window missing. When the cab gets into the shop it will be braced and levelled and cosmetically restored for visitors to be able to step inside for the train crews view. 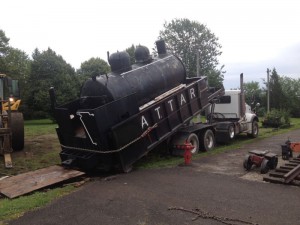 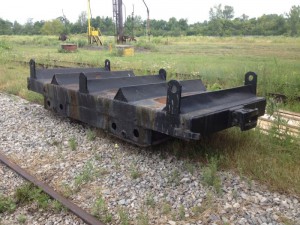 On Sunday July 20th, Museum members along with a crew from Attar Metals started the move of the ex-Atlas Steel 30? gauge Porter fireless locomotive to the NRM shop. It had rained all day on the 19th, but the move went on. With the size of the engine being what it was, Attar brought a small bin to load the engine into for the 1 mile trip across down.? However as well as the move went, it was decided that it was just far too wet and the ground too soft to attempt to get the engine off the grounds.? The bin and locomotive were moved away from the public area and will be moved to the shop when there is a dry spell for the ground to be a bit more solid. The ingot car did however make the journey to the Museum and is now outside waiting for the locomotive to arrive to be moved into the shop.? There is already a panel track built to place the locomotive on when it arrives.? The NRM is very pleased to be able to enter into this great working partnership with the Welland Historical Museum to ensure the continued preservation of the Atlas Porter. 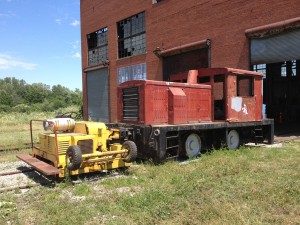 At the July open house the Museum?s Whiting 2TMA was operated for the first time on rail. It was the first time that a piece of railroad equipment, in this case the Plymouth MDT40t, was moved by a piece of railroad equipment (the Trackmobile) at the Museum.? It marked a major milestone as the Trackmobile arrived in pieces, unknown if it would even run.? After a year and a half long restoration it is back in operation.