Productive weekends at the NRM

Our second open house of the year was on the Canada Day long weekend.? Attendance was down a bit, but still fair. Gained at least 1 new member, so that?s makes a lot of the time spent there worth while. Some work was even done during the open house itself, with Rick starting to put the Trackmobile back together.

On Saturday July 6, a crew was out at the shop. Once again Rick worked on the Trackmobile, which went very well.? The clutch plate is in great shape, and the gear boxes are starting to go back together.? The one hydraulic cylindar is a bit pitted and was removed from the unit.? Luckily it is in otherwise great condition, and should be just fine for the amount of time we plan to use the machine. 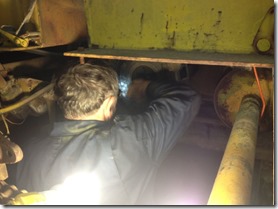 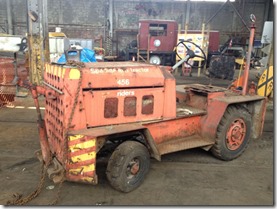 (left) ? Rick works on the clutch plate on the Whiting 2TMA Trackmobile in preparation for installation of the gear boxes. For the first time in many years, the Mercury Tractor (ex-Spadina Motive Power Tractor) got its tires pumped up.? The machine was moved around the shop for the first time as well.

Unit 456 was the former Motive Power tractor for the Spadina Shops in Toronto.? This heavy machine was used for moving the locomotives around the shop.? It somehow ended up in Fort Erie, but was heavily damaged during the years after the shop closed. Today the tires were inflated, and actually held air. The machine was moved around the shop a bit, and will be evaluated for future restoration.

On a sad note, another piece of railway history was lost this week when CN scrapped the car scale in the yard.? The scale house was also demolished.? However, the NRM was able to acquire the beam scale from inside the scale house.? Some damage occurred during movement, but the parts are already being readied for repair.? The unit will be repaired and repainted for display inside the shop. The Niagara Railway Museum Inc. wishes to thank CN Rail for their donation of this piece of Fort Erie?s Railway history, and to Attar Metals for removing and delivering the unit to our facility. 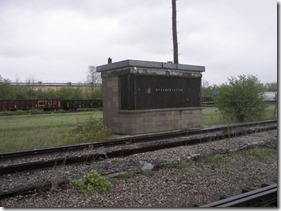 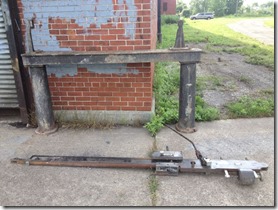 The scale track and scale house in 2012, long out of service (left). After removal the scale was delivered to the main doors of the shop.? The unit will be repaired and repainted before going on display (right).