More progress is making a difference

I don?t really know how todays work session could have been any better. A 6 person crew came out to the shop today, and took on 4 different projects. The main goal of the day was to start covering up some of the hundreds of broken and missing windows.? We decided the easiest way to do this was with clear corrugated PVC panels. As work started in the morning, however, it was quickly discovered that manpower could be utilized in a number of different projects.? 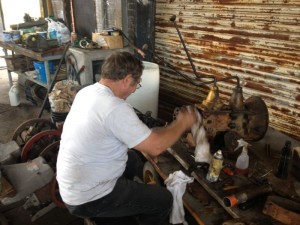 Rick went to work finishing off the transmission for the Whiting 2TMA Trackmobile, bringing that restoration one step closer to completion. Ken Sr. worked on cutting down some of the weeds around the track, and assisting the window crew when required.

John continued with painting the south wall, and got another 2 1/2 sections finished. We hope to have the south wall done along the work platforms by the September open house.? If that is done, we will proceed with painting the north wall of the heavy repair bay.? The paint has made a huge difference in the appearance of the shop interior, hand has all been donated by members.

The window crew went to work just before 10am, starting with 2×4 framing to secure the PVC panels to. We had 25 pieces to start with, which would be about 1/4 of the south wall.? Marcel and Jim assembled 8? long frames on the ground while Ken worked in the Genie lift placing the frames and securing the PVC panels.

?Home Depot in Niagara Falls gave the NRM a discount on the PVC panels, which was a great help.? Once again all the funds for the purchase of the PVC were donated by NRM members.
None of this window work, however, could have even been attempted without the continued assistance of Attar Metals in Fort Erie.? Milton offered the NRM use of their Genie lift to get up to the windows.? It was perfect for the job, and made the work go so much easier.? In the end, 14 pieces were installed, a total of 7 sheets (we get 2 pieces per sheet)? Milton and Attar Metals have been continued supporters of the NRM since they located to the area about? 2yrs ago. Without their continued support, a lot of what we do just wouldn?t be possible. 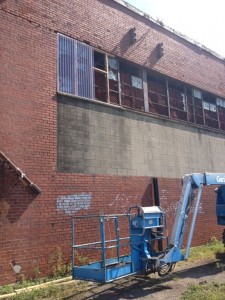 The first 2 PVC panels are in place. 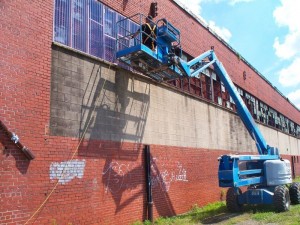 Ken is up on the lift installing the 2×4 frames and PVC panels, closing in the south wall of the shop. 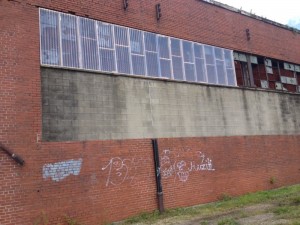 After 7hrs of work, 14 pieces were installed. 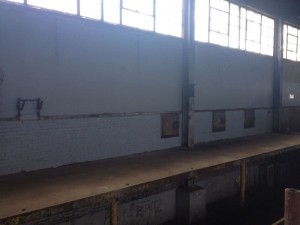 John continued painting the south wall, finishing another 2 1/2 sections. The new paint on the north and south wall have made a significant difference inside the shop.

Be sure to come out to our final open house of 2013 on September 7 & 8, 10-4 both days, rain or shine. See all the changes and improvements that have been made, and see how you too can become involved with the Niagara Railway Museum Inc.