Well, today ended up being a very busy day at the shop.? We had a few people through the doors, and got some work done as well.? More of the grass was cut, and some interior cleaning was done.? Outside, things were just as busy.? Within an hour 4 trains went through, including CP.? CN had 2 sets of power around the yard, but one set had left late morning.? The power that stayed was parked right beside the long out of service scale. 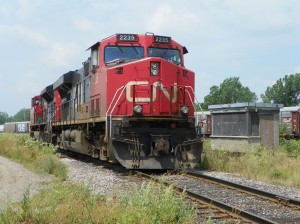 Just before lunch, the Norfolk Southern came across, with a pair of BNSF units.? I managed to snap a shot of them as they were grabbing a cut of cars from track 1, before heading to the north side of the main to grab the steel slabs.? As I watched the NS train pull into the yard, I spotted a very rare hopper car, now marked as RFMX, but formerly Conrail, and before that Penn Central.? The Conrail markings were painted out, but the Penn Central ones are showing up quite well. 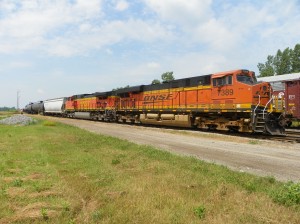 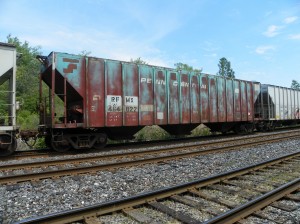 With the recent arrival of our 3rd ex-Hydro locomotive, the NRM now has a very unique display. Both our steam engine, #46, and our electric, E-7 worked together during the construction of the Queenston-Chippawa Project.? Our Plymouth diesel was used during construction of Adam Beck G.S. #2, which creates a display of 3 locomotives from 2 of the most famous power projects in Canada.? I would like to take this opportunity to thank the various groups involved with this move/acquisition.

Villeneuve’s Steel Wheels – Floated the locomotive to our shop

NRE-Alco Locomotive Canada – loaded both the locomotive, trucks and other parts

The Northern Ontario Railroad Museum & Heritage Centre for not scrapping this surplus unit, and allowing us the time to acquire it from them

The past 2 months have been very busy for Niagara Railway Museum members, as we work to get our new home cleaned up to make the area safe for us to work in.? A presentation to Town Council on May 25th, officially put the NRM out in the open.? Our site IS NOT open to the public at this time, but as clean up and safety improvements progress, we plan to hold?an open house in July to show off the site, and some of our equipment.

The Niagara Railway Museum will be located in the former Canadian National diesel shop in Fort Erie, Ontario.? This great facility will allow us to display and interpret our equipment in an actual railway shop building.? There is much work to do at the site, including windows, hydro, and a complete rebuild of the former office area, to make it climatically controlled for artifacts, and rebuilding the washroom for use, as it was completely destroyed by vandals.? Our first locomotive, Hydro Electric Power Commission 0-4-0ST #46 is scheduled to arrive on June 1st, and will mark a major milestone for the Museum.? Our Plymouth diesel is expected to follow on June 2nd.? I thank all of our members who have stood by the Museum all these years as we work towards this goal.? We hope to be a pivitol part of tourism in Fort Erie, and will strive to create an attraction that will promote the railway heritage of the Niagara Region.

On Saturday September 20th, 2008, a small gang of volunteers from the Niagara Railway Museum travelled to Aylmer, Ontario to remove a 300ft long unused siding at a feed mill. The track was donated to the NRM by Elgin Feeds, and arrangements were made to get the track out of the ground and ready for movement back to Niagara. The NRM crew consisted of President Ken Jones Jr., V.P. Aaron White, Ryan Grimes, Ken Jones Sr., and Jeff Smith.

It was a perfect day weather wise, and despite a 1/2 hr delay while the rented skid steer wouldn’t start at the rental shop (something that would haunt us thoughout the day), things went fairly well. We did our best to save as much of the other track materials as we could, but many of the bolts ended up being chopped off. The rail is a mix of 80lb & 100lb, with much of it being more than 70yrs old. Some pieces of the 80lb rail have some damage to their heads, but since we aren’t planning on using it for running rail, it will not pose a problem.

The skid steer is crucial when moving around track materials due to the fact that a stick of 80lb rail can weigh upwards of 800lbs. It is needed to drag the rail over to the pile, and stack it neatly.

With this donation, we will have enough track length to store all of our current equipment. This will greatly aid us when we are ready to set up the museum site. We will still need to acquire ties and bolts.

The majority of Saturday was spent removing, sorting and stockpiling the track materials. Sunday morning was spent spreading and leveling the recycled asphalt we used to level the parking area where the track was. The skidsteer was used to backfill the low spots and fill in the ruts in the driveway.

The Niagara Railway Museum wishes to thank Wilf Saarloos, Owner of Elgin Feeds for donating the track to the Museum.

On Saturday July 7th 2007, members of the Niagara Railway Museum ventured north to the Private railway collection known as the Uptergrove Shortline Railroad. This trip, the first for 2007 served many purposes. It was originally a trip to help load our newly acquired Whiting 2TM Trackmobile, however, it turned into much more than that.

2 months ago, we spoke to a local businessman, who handles lift truck repairs, about moving the Trackmobile back to Niagara. Ted Lucas, owner of Lucas Liftruck Service in Thorold said he would gladly assist us with the move. The date was set, and we all arrived within 20 minutes of one another. The loading of the 2TM went well, and it was good to see that all 8 wheels rolled (4 road, 4 rail) despite the fact that 2 of the tires were flat. The transmission for this unit is currently being rebuilt by our own volunteers. While we were there, we also purchased a 400amp Miller welder, which Ted offered to load on his truck as well, and bring it down to his shop, along with the Trackmobile for storage.

The loading didn?t stop there. He also offered to take the air tank, steam dome, and coupler, on the truck, which saved us the trouble of trying to find out how to get it down here later. The members and board of the Museum would like thank Ted for assisting us with this move, and we are pleased that we are able to get more of our equipment down to Niagara for restoration.

We decided that while we were there, our resident welder and board member Steve Konig would weld some extra braces in the cab to help stabilize the cab for the eventual trip back to Niagara. Steve spent a few hours welding supports between the walls in the cab, along the coal bunker, and some spot welding on the floor and sides. At the end of the day, the cab was pretty solid, considering the amount of deterioration. We are hoping that the next trip north will be to load #46 and return her to Niagara.

The final item on the trip was to pick up another motorcar. Museum V.P. Aaron White decided that we needed a Sylvester Motorcar, a purely Canadian built car, in the collection. The Museum already owns 6 motorcars, and we felt that at this time, the acquisition of another car would not be possible. Aaron stepped up and said he would acquire the car and loan it to the Museum for display. The Sylvester, a model 21E, is in need of a total restoration, and will be another project on our list. The Museum cars are all Fairmonts, while 2 Fairmonts & a Woodings are on loan to the Museum. The new car will be the 3rd builder for display.

Our Whiting 2TMA Trackmobile has arrived!!

On Saturday, July 7th, members of the NFRM journeyed up north to load up our recently acquired 2TMA Whiting Trackmobile.? When rebuilt, the unit will be very useful when it comes to moving equipment around the display site.? We have also acquired a 400amp Miller welder, which can also serve as a backup generator, and will be needed in the restoration of #46 when she is brought back to Niagara.? The NFRM thanks Ted Lucas from Lucas Lift Truck in Thorold for moving the Trackmobile, welder, and more parts for #46 (air tank, steam dome, coupler).? All these items will be put into storage until we are ready for them.? Meanwhile, we will continue to work on the Trackmobile.? A photo of the Trackmobile, and another project car, a Sylvester 21E motorcar (privately owned, and also picked up July 7th) are now in the equipment list on the collection page.? There is also an updated photo of #46, also taken on the 7th.

On November 18, 2006, NFRM President Ken Jones Jr., V.P. Aaron White, and Secretary Guy Bingham journeyed north to the Uptergrove Shortline Railway (a private collection) a work session on NFRMs ex-HEPC steam locomotive #46. The main goal of this trip was to brace the cab (which has serious deterioration of the steel work) to prepare for the winter, and any snow accumulation which may occur. The main fear was that if snow got too heavy, it may collapse the cab, thus ruining the pattern for the new cab. While we were there, we managed to wrestle the drive rods, and one coupler out of the bush. They are now in Niagara Falls awaiting the arrival of #46. 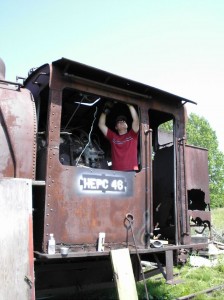 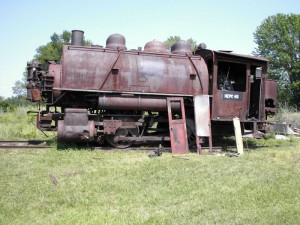 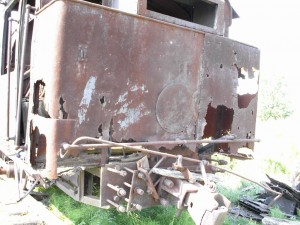 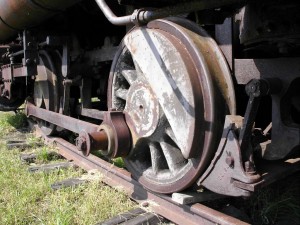 In the first work session of 2006, NFRM’s newly acquired locomotive, Hydro Electric Power Commission #46 receives some attention in preparation for her move back to Niagara Falls. All easily removable or damageable parts were removed.

On November 19th, 2005, the Niagara Falls Railway Museum vacated the property where our cars were being stored. A small group of 7 people (2 who weren’t members, but still wanted to help) came out to get the cars packed and ready for movement. This involved packing our 4 Fairmont A4D motorcars, all the track lorries, the grinder, crane and stairs. All went smooth, and the cars were packed and off the property by 2pm. The 4 smaller motorcars were moved to private storage for continued maintenance and restoration. Thanks to all who helped out with the move. 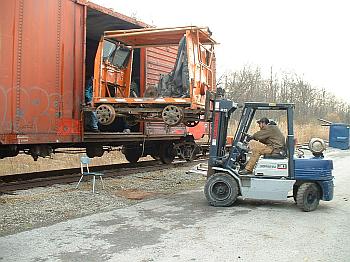 Steve Konig eases one of the NFRM’s Fairmont A4d motorcars into the boxcar for storage. Thanks to Lucas Lift Truck in Thorold Ont. for loaning us the forklift for the day. 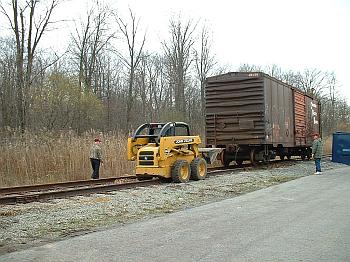 Moving ex-CPR 401258 to the south end of the siding for eventual movement to a new home. 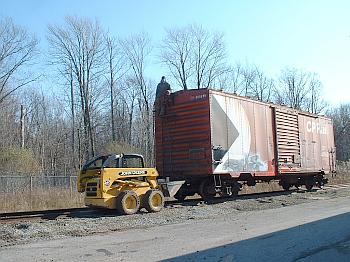 Steve Konig mans the high hand brake as the final car, CP 401639 is shoved to the south end of the siding. 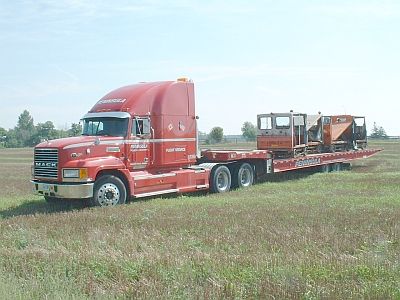 In a recent donation by Bob & Rick Collier, the Museum gained 4 ex-CNR Fairmont A series gang cars. The cars are now at the museum site, and it is hoped to build 2 good cars out of the 4, with the other 2 being parts cars, and eventually passenger trailers for rides.

We would also like to thank Peninsula Towing & Recovery of Niagara Falls, for moving these cars from Strathroy to the site.